Even Champions need a coach.

Can you imagine being the mentor to Moses? True to form, that’s exactly what Jethro, the father-in-law of Moses became in Moses’ life.

Jethro saw all of the amazing things that God was doing in the lives of the Israelites. However, he also saw the burden that his son-in-law was carrying.

The conflict is that Moses was incredibly anointed and had received an immeasurable amount of revelation from God. Yet, his organizational structure was personally overwhelming.

“This is not good!” Moses’ father-in-law exclaimed. “You’re going to wear yourself out—and the people, too. This job is too heavy a burden for you to handle all by yourself. Now listen to me, and let me give you a word of advice, and may God be with you. You should continue to be the people’s representative before God, bringing their disputes to him. Teach them God’s decrees, and give them his instructions. Show them how to conduct their lives. But select from all the people some capable, honest men who fear God and hate bribes. Appoint them as leaders over groups of one thousand, one hundred, fifty, and ten.

Isn’t it amazing to think that as much of the revelation that Moses had received from God, it was his own father-in-law that brought to him the protocol of authority?

We should be wise by creating a structure that works with you and not against you.

The disciples made the decision to keep their attention on the Word of God and prayer and intentionally select capable men to do the work of ministry. In Acts 6:1-7, we see that keeping themselves from the distractions that ministry inherently brings, the Word of God increased and more and more people were added to the Church.

So, we’ve created the FivestarMan 300 Matrix that honors the protocol of authority of your leadership, brings the structure necessary for the work to be done, and empowers capable men to influence increase in your church. 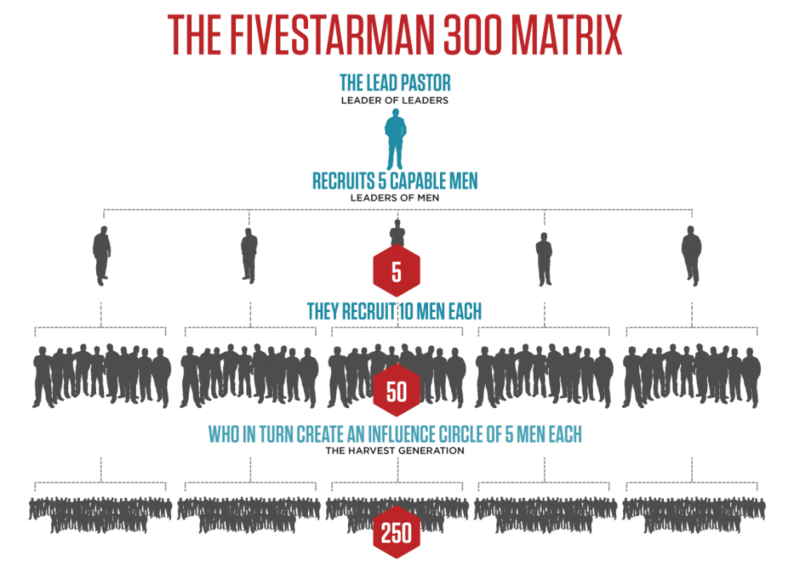 Here’s how FivestarMan 300 works in your church:

This is where it gets even more exciting.

FivestarMan 300 coaches the 5 Capable Men to encourage and inspire the 10 men they meet with in the huddle, but we also empower the 10 men to influence men outside the church.

Every man has a relationship ratio of 1-to-5, meaning that he influences five family members, friends, co-workers, or acquaintances. We empower the FivestarMan to “Focus on Five.” These men are within the proximity of your church, but we’ve not had an influential strategy to reach them until now.

Leave a reply Click here to cancel the reply